Get to Know a Local Poet: Lana Hechtman Ayers 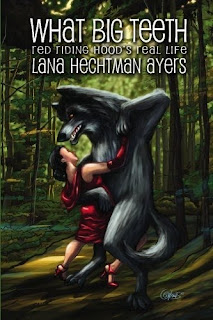 We've been fortunate in getting to know Lana Hechtman Ayers better over the past few years through working with her at the Port Townsend Writers' Conference and at Crab Creek Review, where she is the poetry editor. Originally from the East Coast, Lana now lives just across the pond from Seattle in Kingston, WA.

Lana's work has been feature in numerous publications such as Slant, Potomac Review, Cider Press Review, and Bitter Oleander. Besides working with Crab Creek Review, Lana runs Night Rain Poetry, which offers manuscript and poetry editing and writing workshop services, and she publishes the Concrete Wolf poetry chapbook series. She is also the author of several full-length collections of poems and chapbooks, including Dance from Inside My Bones, Chicken Farmer I Still Love You, and her latest book What Big Teeth: Red Riding Hood's Real Life, which serves as a prelude to her forthcoming collection, A New Red.

What first inspired you to take on the retelling of Little Red Riding Hood's story?

Red herself inspired me to take on the telling. As coy as it sounds, Red Riding Hood showed up on the page one day as I sat down to write. Then she just kept showing up. I would sit down to write about something else and there she'd be. It actually got to be a bit frustrating. I understand fiction writers are often stalked by characters until they give in and write their stories. As a poet, that had never happened to me before.

So then I decided to do some research into the fairy tale, maybe find out its significance. It turns out that there is a wealth of critical writing on fairy tales in general and Red Riding Hood in particular. Independently, scholars Jack Zipes and Alan Dundes have done extensive work collecting and analyzing all the versions of the fairy tale. And according to Catherine Orenstein's Little Red Riding Hood Uncloaked: Sex, Morality, and the Evolution of a Fairy Tale, there is some version of the Red character in the folklore of nearly every culture on nearly every continent. And the moral lessons that seem implicit in each version of the tale vary greatly as well. Understanding how widespread, compelling and embedded the Red Riding Hood story is in the human psyche, I could finally give in and let Red take the lead.

Once I gave in, the poems came feverishly.

Would you say that What Big Teeth: Red Riding Hood's Real Life is more of a social commentary about women choosing the life they want, rather than the life that society wants them to have?

Yes, I would say that my collection What Big Teeth: Red Riding Hood's Real Life is concerned with women's expected roles in society. Even more than three decades after the women's movement exploded onto the scene, woman are still agonizing over choosing between work they are passionate about and their familial and domestic responsibilities. The Red Riding Hood of What Big Teeth never strayed from the path, thus never met the Wolf when she was a little girl. She obeyed all the rules and ended up as a young adult woman who was married and working at a daycare, who really had no idea who she was or what she was passionate about.

Would you say that most women generally choose the wolf over the "nice guy"?

This is a tough question to answer, so I'll try to do so in the context of the story. Hunter, the lumberjack Red Riding Hood marries, isn't a bad guy. He is definitely what one might think of as a macho guy. He is a man's man as they say and wants a wife who knows her place. In that way, he is almost more of a stereotypical "Wolf" and physically dangerous character than the Wolf of this story who is an artist. Although, the Wolf as an artist is dangerous to the status quo. Ultimately, it's not a question for Red of choosing a dangerous guy or a safe guy, but of finding a way to stop playing it safe in her own life, of learning to take risks and reach for her own goals.

The Wolf is certainly more cultured than Red's husband, more genteel. He's a painter after all, but the moral of Perrault's version of Little Red Riding Hood was a poem that ended with these lines:

"Alas! Who does not know these gentle wolves
Are of all such creatures the most dangerous!"

The Wolf's character is explored in greater depth, as are all the characters, in my full length collection A New Red. His intentions upon inviting Red to pose for him are probably mixed. He does want to paint her, but does he expect more? We know so many real-life artists who have affairs with their models and there is a predatory element in those relationships borne out of the fame/power dynamic.

Red's grandmother seems to be the only other person in her life that understands her need for individuality and the "road less traveled"--is this the case?

Red's grandmother may have found small ways within her traditional strictures to be a free-spirit. But grandmother also has lived a lot longer and perhaps learned more about herself in the process. The Wolf as an artist should certainly understand Red's needs but his feelings way get in the way. 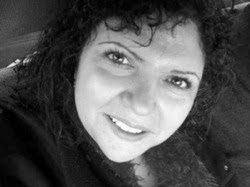 Can you tell us more about the significance behind Red's cape?

From the fairy tale viewpoint, that cape is loaded with symbolism and innuendo. The color red is associated with shame, danger, and anger. In the fairy tale, it connotes lost innocence being the color of menstrual blood, beginning sexuality. According to Bruno Bettelheim's Freudian analysis of Little Red Riding Hood, the cape can be thought as symbolizing the hymen and the girl's unconscious with to be seduced.

In my chapbook, What Big Teeth, the cape is more of a McGuffin. That is, it is just a vehicle to move the story along. The red cape is a conversation starter for the Wolf and Red Riding Hood and not all that crucial of a story point.

However, in my full-length collection Red Riding Hood collection, A New Red, coming out this fall from Pecan Grove Press, the color red comes to mean much much more. You'll just have to wait and see.

While reading What Big Teeth, we couldn't help but think about Tennyson's famous quote: "Tis better to have loved and lost/ Than never to have loved at all." Would you say that this is true for Red, or does she have any regrets?

Red does regret that she followed the path that was laid out for without really allowing herself to stop and smell the flowers. She regrets not taking time to see that by doing what everyone says is the right thing, she isn't doing the right thing for anyone. She regrets rushing into marriage and then hurting the man she married. But most of all, she regrets not thinking for herself.

It's hard to say what might have been had the Wolf not come along. I'd like to believe that Red would have encountered another situation that would have provided the necessary catalyst for change. I don't want to believe she'd stay stuck.

Don't we all have teachers in this life who provide for us not only understanding of the world outside us, but the world within? The Wolf was such a teacher for Red, whether or not he meant to be.

We can't help but think of well-known female characters such as Eve or Hester Prynne while thinking of Red; were there particular females that you had in mind while writing What Big Teeth?

Very insightful. I do think the Red Riding Hood from What Big Teeth has much in common with Eve and Hester Prynne, as well as Persephone and many other biblical and literary heroines.

I think I also had in mind my own mother, a 50s housewife who likely never wanted marriage or children but didn't find herself with any other options. She had always loved to sing in her youth from the stories I was told by relatives. And she even cut a single in one of those do-it-yourself recording shops they used to have in record stores. But she never once sang in my presence, not even along with the radio. I find that terribly sad.

And perhaps, even a little of my own history. I remember once telling my father I wanted to be an astronaut and him saying women couldn't do that. He wasn't a chauvinist or a cruel man. He was born in 1916 and just grew up in an age where that was the truth. My father just didn't want to see me disappointed.

We see that What Big Teeth is a prelude to a forthcoming full-length collection; what can readers expect for Red's future?

In the forthcoming full-length collection, we see in-depth into Red Riding's life. We get to know her mother, her husband, her friends and acquaintances, and yes, even grandma. We also get to know the Wolf, the real Wolf and what makes him tick. We learn in detail everything that really transpires between Red and the Wolf and all the consequences. And, the very phrase, "A New Red" takes on a very significant, devastating and transformational meaning.

Is there anything else that you'd like to add for readers?

Thanks, Jen for your thoughtful interview questions.

I hope readers will find What Big Teeth pleasurable and want to know more like I did. Here are some wonderful books to investigate.