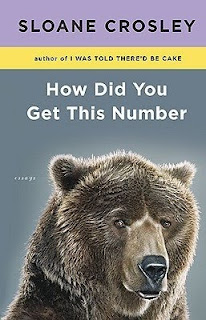 Sloane Crosley will be reading from her latest book of essays How Did You Get This Number tonight at University Book Store at 7:00 p.m. This event is FREE.

We're just going to assume that like us, you too first fell in love with cute-as-a-button Sloane Crosley after reading her first collection of short essays, I Was Told There'd be Cake. Once dubbed as the writer of the worst-selling Maxim cover story in the magazine's history, Crosley has since been compared to many of our all-time literary favorites including Sarah Vowell, David Sedaris, and the infamously always lovely Dorothy Parker.

How Did You Get This Number does a fantastic job of further highlighting Crosley's maturity as a writer and now as an early thirtysomething who has moved past the young woes of botched first jobs and the like, and into more of an adult realm of situational humor. However this is not to say that her second collection of essays is any less humorous than the first; rather we think it just may be the opposite.

And with essays based in locations such as Lisbon, Portugal to New York where she lives, to Anchorage, Alaska and more, Crosley reminds us once again in How Did You Get This Number of life's little moments and humorous gems that everyone--regardless of age--can relate to. And as Crosley continues to nail each essay perfectly and poignantly, there we were nodding right along with her and thinking, "That's JUST how we remember it." One of those special moments where you find yourself dog tagging page after page and wishing that the author was rather a close friend and you could call them just to say, "ME TOO!"

One essay in particular, Light Pollution, really hit home for us. Crosley travels to Anchorage, Alaska--our hometown--for a close friend's wedding, where she encounters all of the big, the bad, the beautiful and the sometimes ugly that Alaska has to offer. We were absolutely stunned by how Crosley, a Manhattanite and overall an observer on a brief summer trip, describes our beloved state so clearly for what it actually is. Frankly, we've never heard an outsider from "the Lower 48" get it so correctly, and for every time that we've been asked if we grew up in an igloo or mushed dogs to school or eaten a polar bear for lunch, Crosley only eases the pain by demystifing the myths that have been a perpetual aspect of meeting new people and revealing where we are from. Crosley describes first meeting her friend April, during their post-graduate years in New York and learning that she was from Alaska:

"'Alaska!' The human resources lady brightened. 'Hey, now! I'm sure New York will seem like Jaimaca to you.' April gritted her teeth and let out a fake laugh, the kind where one pronounces the word 'ha.' The assumption of dramatic regional evolution is one of humanity's odder tics. I, for example, do not listen to every schizophrenic hobo muttering to himself on the subway or cover my ears when the train comes. But must I be diagnosed by the rest of the country as legally deaf?... People of central Africa, I beg you; never come here unless you are willing to sit in a locked sauna and have some bozo say the words 'I'll bet this feels like air-conditioning for you.'"

In another essay, If You Sprinkle, Crosley takes us back to the early nineties where her and her friends are playing Girl Talk--"an early-'90s version of truth-or-dare, designed to sanction prepubescent cruelty via laminated cardboard" at the middle school Queen Bee Zooey's house during a sleepover.

"Imagine, if you will, the legal repercussions of a game manufactured today in which underage girls are encouraged to call strangers' homes in the middle of the night. Or to leave the house sporting a 'silly outfit.' It's all fun and games until someone winds up in the back of a cop car, clutching a Cabbage Patch Kid. In hindsight, I am proud that I declined to imitate a convicted child molester or assume a doggie position in order to win a board game. As if all this wasn't enough, you needed 'household' items to play, including shoelaces, a short-wave radio, and a blindfold. Were we preparing for our future fiancés or the apocalypse? Or both?"

And as middle school always seems to go, Crosley details her days in the sun with Mean Girl Zooey and her fall from grace leading up to what looks like a ransom note left in her locker, that simply reads "YoU R a Looser."

By complete chance, Crosley re-encounters Zooey years later in a Manhattan Chinese restaurant women's bathroom while she is doing "research" (WAY too funny to spoil). One of those strange moments where life throws some personal justice your way by absolute chance, and you can't help but feel--even if only for the day--that everything is right in the world.

Though How Did You Get This Number includes six less essays than I Was Told There'd be Cake, the collection is significantly longer, further showing the maturity in Crosley's writing. Or, as she puts it, "Which means one of two things: A) I am telling more meaningful stories with nuanced humor that go beyond watch-the-birdie tangents and thus change the face of America and America's children and the dolls that America's children play with or B) I can't shut up. I guess I'll find out." And for all of you like us that just can't seem to get enough of Sloane Crosley, you're in luck--HBO recently bought the rights for I Was Told There'd be Cake and we hear that Crosley is busy at work on the screenplay. Possibly the next, better-than-The-Sex-and-The-City girl's show? Without shitty sequels? We have a pretty strong feeling that this just may be the case.
Posted by Seattle Lit at 9:32 AM

Labels: How Did You Get This Number, June '10 Lit Readings, Sloane Crosley, University Book Store