Debut Novelist Jean Kwok on What it Means to be a Girl in Translation: Part 2 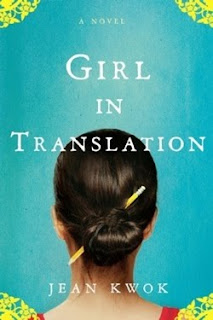 Jean Kwok will be in town to read from her debut novel Girl in Translation at the Elliott Bay Book Company on Saturday, May 8, at 7 p.m. This event is FREE.

As continued from yesterday...

Kimberly has a best friend in the novel, Annette, who helps her in many ways and overall gives her much-needed "American" advice. Were you lucky enough to have a close friend to help you adjust to your new life in New York?

I am so grateful for the friends I've had in my life. Annette is based upon a conglomeration of several close friends I had. In elementary school, there was one special friend who came from a wonderful family, and they helped us a great deal. Mrs. Avery is partly based upon her mother. I had another good friend and her grandmother was a real estate agent. Her grandmother not only helped us get out of the roach-infested apartment we lived in, she also went to the bank to personally vouch for us, so that we could get a mortgage. We hear so much about humanity's negative qualities, but there are truly many more people who are extremely kind, without any thought of personal reward.

It seems as if Kimberly's family is being exploited not only by the sweatshop, but also by her aunt and uncle. We found this to be a really interesting idea since stories you normally read about immigrant families are of them sticking together and supporting each other. Is this not as typical as we'd like to imagine?

Jealousy, selfishness, and genuine love can be found in immigrant families and in any other type of family. Of course immigrant families do help each other, but there are often elements of competition and guilt as well. Aunt Paula brought Kimberly and her mother to the United States and in her mind, she has helped them as much as she could. Kimberly deeply feels her obligation to her own family, her mother, and that results in some of the most important choices that Kimberly must make.

(Jean, shown below with her school principal, Mrs. Kasindorf.) 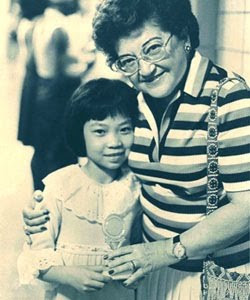 Like Kimberly, as a child you excelled in science and math, even going on to work in three laboratories during your senior year of high school. What made you instead switch to English and literature? Was there a writer hiding under there all along?

When I was seven years old and we were all still working in the sweatshop, my older brother brought home a present for me. He worked day and night at the factory, and if we finished early, he went to his second job waiting tables. There was no money to spare. Somehow, he had saved enough money to buy me a diary with a little lock on it. "Whatever you write in this, is yours," he said. When I look back, I'm amazed that he knew to give me something that would change my life, rather than a toy or a piece of candy.

I loved to read and had read every book in the Children's section of our public library. English was one of my favorite subjects. I also loved science and math as well, and that seemed to me to be a safe road. My background was so difficult that I never considered doing anything as risky as trying to become a writer. It was only at Harvard that I realized I would never have to go back to the factory, and that I could do what I truly wanted: to become a writer.

After learning English, you were offered full scholarships to some of New York's most elite schools, and then went on to study at Harvard and Columbia--opportunities that many American students could only dream of. Looking back on your childhood, it reads almost like a modern-day Cinderella story. Is that the case? Do you feel as if you get lucky in some respects or do you view it rather as just a lot of hard work actually paying off?

Believe me, I worked hard, but that hard work wouldn't have been enough without a great deal of luck. I have been extremely fortunate in so many ways. Although I was a disaster as a Chinese daughter, burning everything in the kitchen and making every mess worse instead of better, I was born with the ability to be good at school. If my talents had been reversed, I would probably be a very good cleaner in a restaurant somewhere.

The principal of my elementary school, like Kimberly's principal, singled me out after I won the school spelling bee and led me through the private school application process. I was lucky enough to also be accepted to a public high school for gifted children. Even there, I doubted my own abilities, although I knew that if I didn't get into a college like Harvard that offered a full scholarship, I probably wouldn't be able to go to college at all.

I remember my guidance counselor stopping me in the hallways and saying bluntly, "Why don't you apply early admissions to Harvard?"

She stared at me over her glasses. "Jean Kwok, if you're not the kind of student who gets into Harvard early, then who is? I want to see your application by next week."

So I did what she said, and she was right. But at every turn, I was helped by people who believed in me and knew what I was capable of better than I did.

And that is especially true of my publishing career as well. My manuscript was pulled out of the slush pile by Suzanne Gluck, co-head of the worldwide literary department at William Morris Endeavor. She's one of the most powerful and insightful agents in the business, and she led me to Sarah McGrath, my editor at Riverhead Books, who is one of the best readers I've ever known. Then my novel was embraced by the extremely warm and frighteningly effective marketing, sales and publicity people at Penguin, who all worked together like one well-oiled machine to get the word out.

I have been so lucky that I keep waiting for the nurse at the psychiatric institution I must be in to wake me up.

(Jean, shown below at graduation with her mother.) 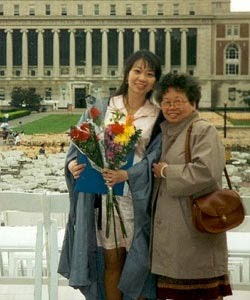 Besides being well rounded in school, you were also a professional ballroom dancer at one point before getting your MFA, what was that like? And with all of your studying, when did you find time to learn ballroom dancing?

Dance was something I instantly loved. I never took dance lessons as a child, of course, so I started training quite late. I was busy at Harvard: I often had up to four jobs at a time to pay for my education, plus studying, dating, and dance lessons. I graduated with honors and then started looking for a job that would give me the freedom to write.

There was an ad in the newspaper for an audition at a major ballroom dance studio in New York. I was terrified, but I went. I remember I only had one pair of high heels and I had to color in the bald parts with a magic marker for the audition. I found myself in a huge group of people. We were all taught combinations and watched, and about twenty of us got invited back for the "training," which was actually just another part of the selection process. We were taught daily for three weeks, and every day, there were fewer and fewer people in my group. I didn't know where they went. They just disappeared. One day, I came and I was the only one there. I thought, "This is when I disappear too, or I have the job." Fortunately, I had the job.

I spent about three years as a professional ballroom dancer, in between Harvard and Columbia. I taught and did shows and competitions. Most importantly, I was taught by some of the best dancers in the world. Our studio was owned by the then-current US champions, and my colleagues were world-class champions as well. I really loved it.

Who are the writers that you feel have had a great influence on your work?

In terms of structure and writing, I'm a great admirer of Margaret Atwood and Kazuo Ishiguro. There are so many wonderful Asian American writers as well. Maxine Hong Kingston and Amy Tan are some of the greats, of course, and Chang-rae Lee has an amazing new book out, The Surrendered.

I've always been a big fan of Chang-rae Lee's and I remember coming across The Surrendered in the Riverhead catalog. Slowly, the gears started turning in my head. I asked my editor, Sarah McGrath, "Are you his editor?"; And she replied, "Of course! Didn't you know?" I was stunned, and very humbled.

Will you be going back to New York as a part of your book tour, or do you still visit often? What's it like for you now, seeing it from such a different point of view?

We always come back to New York at least once a year, to see my family and friends, but now, I've been coming much more frequently because of the book. I love being in New York. I love the street musicians and the restaurants, the taxi drivers and the sheer excitement of the city. I appreciate it more now that I no longer live there.

By the way, I was in Seattle a few months ago for my pre-publicity tour, and it is one of the most beautiful cities I've ever seen. The booksellers I met here were fantastic, and it has such a wonderful community of book lovers.

Are you currently working on another novel? What's next?

I've got the next novel completely planned and partially written. It's set in both Chinatown and the professional ballroom dance world, so it's been a lot of fun to write. I had a lot of adventures as a professional ballroom dancer, so I've always wanted to write about what it's like for the professionals behind closed doors: the parties, the competitions, the dancing. But it's about Chinese immigrants as well. I'm looking forward to getting back to the writing, once I've done the publicity for Girl in Translation, of course!
Posted by Seattle Lit at 12:30 PM