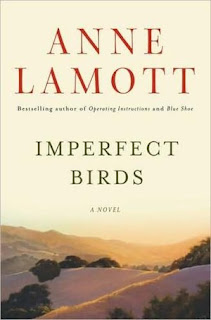 Anne Lamott will be at the University Village Barnes & Noble on Tuesday, April 13 at 7:30 p.m. to read from her latest novel, Imperfect Birds. This event is FREE.

At first glance, one may not realize that Anne Lamott's latest novel, Imperfect Birds, is the final piece of a trilogy--or as her faithful readers may call it--the last book in the "Rosie" series. Imperfect Birds stands on its own as a novel quite perfectly, in fact. The characters, the setting, and the plot are all introduced in full detail, as if they hadn't already played their roles in Lamott's previous novels, Rosie and Crooked Little Heart.

We began Imperfect Birds without any knowledge of its connection to the other books. Absolutely no idea that this was the ending of a trilogy. Not once does the book reveal this information, or make you feel as if you're missing a large chunk of the story.

Normally the idea of coming into a series with the last book would drive us crazy. We'd trudge backwards to the very beginning to "do it right." But in this case, Birds already feels complete. Lamott swoops in occasionally when needed to reveal important details about the characters, but does so in a seamless fashion without the story feeling awkward or jumpy.

As in Rosie and Crooked Little Heart, Birds continues the story of Elizabeth Ferguson, her daughter Rosie, husband James, and best friends Rae and Lank. In the past two novels, we've seen Rosie as a child, a tween, and now in the latest, as a smart, athletic, well-adjusted teenager approaching her senior year of high school. Both recovering addicts, Elizabeth and James begin to increasingly worry as Rosie starts to fall into the wrong group of friends, shows disturbing signs of drug and alcohol addiction, and eventually gets caught in an unraveling endless web of lies. 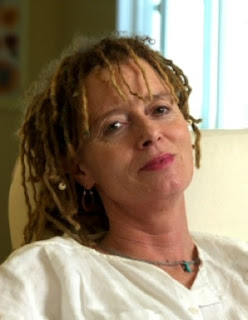 As a past addict herself, Lamott has plenty of experience and knowledge in drug and alcohol addiction. However, it is exactly for this reason that you almost want to reach out and strangle Elizabeth at points throughout the novel. Even as a recovering alcoholic with years of firsthand experience under her belt, Elizabeth cannot grasp the depth of Rosie's addictions until everything has gone much too far. At times, it is beyond difficult to stand by and idly watch Elizabeth's repeated fumbles in denial with Rosie's deceptive antics. It's heartbreaking, and from the very beginning you can tell how badly it all could possibly end.

Elizabeth is so consumed with making Rosie happy and having the feelings reciprocated that she chooses to take more of an oblivious stance on Rosie's drug use time and time again, continually writing it off as "experimental."

Lamott says about Birds, "This novel is about how incredibly hard it is to know and communicate the truth. The great Donald Barthelme said that truth is a hard apple to catch or to throw, and I wanted to explore how deeply into the frightening truth a newly sober Elizabeth was willing and able to go." The novel gains its title from the words of the Sufi mystic Rumi: "Each has to enter the nest made by the other imperfect bird." The fact that you can encounter the divine in only the most humble, unlikely places. Elizabeth ponders this idea, worrying that Rosie will never let her enter her imperfect nest again.

At one point, Rosie's step dad, James, writes a story for NPR on the Parkade--the park area in the middle of town where many of the teenagers gather to get stoned or drink beers. He asks Elizabeth to read the story and her opinion surprised us, since in a way, it almost perfectly sums up just exactly how we felt while reading Imperfect Birds:


"She liked the stuff about the wealthy kids dressed alike in rags, how afraid they were underneath it all that they might lose their individuality. She liked where he'd said that even with their piercings and tattoos, with all that was so alive in their souls--their wildness, spontaneity, silliness, spirit--they were consumed with thoughts of death, their own, and that their parents lived in a kind of death, gray and hassled, multitasking, microwaving organic food, plopped in front of the TV, because these things were all they had energy for. So yeah, they loved coke and speed and Ecstasy, driving too fast, dangerous sex with people who had had dangerous sex with multiple parnters. But what, she asked James, was the story?"

Though we may have not fallen as hard for Imperfect Birds as we have in the past for Lamott's nonfiction, we did like it; the story is true to nature and captures the very real and painful realities surrounding addiction. Imperfect Birds is a story we imagine many people identifying with, and for the novel's honest depiction, Lamott deserves some serious recognition.

Throughout Imperfect Birds, Lamott reminds us that we too, are imperfect birds; not to ignore even the slightest of warning signs; and that even with a lifetime of experience and knowledge on addiction, you are still capable of falling from grace. Anyone that has dealt with addiction or coped with a loved one's addiction will truly recognized the detail and care that Lamott has put into Birds and preserving the ugly truths behind addiction that many of us have a hard time acknowledging.
Posted by Seattle Lit at 8:41 AM