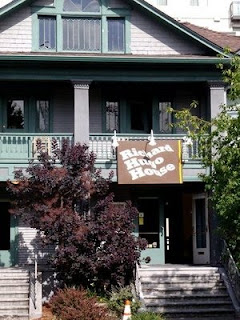 The Richard Hugo House will be hosting their first ever writers' conference over the weekend of May 21-23 and boy, have they got some good stuff in store for participants. The conference will include panels and workshops, among other festivities, to the theme of Finding Your Readers in the 21st Century.

Not only are we in the middle of a terrible economy, but the modern publishing world as we know it is going through a historical transition and looking fairly uncertain for many professionals and lovers. Local bookstores are closing; our favorite magazines and newspapers are increasingly becoming thinner; the industry has seen hundreds of lay offs; and as this decade's most popular saying goes, "Everything is moving to the web."

As the Hugo House notes, "Meanwhile, writers soldier on, putting one word after another, revising and revising again, wondering how, and if, anyone will read their work. Well it's time to stop wondering and take matters into your own hands."

Finding Your Readers in the 21st Century will feature a wide array of favorite Seattle authors, editors, writers, and professionals, such as award-winning publishing consultant Alice B. Acheson, poet and Crab Creek Review editor Kelli Russell Agodon, The Stranger's David Schmader, cofounding editor of Seal Press Barbara Sjoholm, and Bruce Taylor, a.k.a. "Mr. Magic Realism," and many influential others.

With 30 different workshops and panels to choose from such as "E-Publishing," "The Book Trailer: How to Make It, How to Share It," "Platform Building 101 for Writers," and "Publishing on the Web," this conference will surely give participants a much better grasp on our modern literary landscape, along with valuable advice on getting work noticed via print or web, social media promotion, and on how to self publish with the best of them.

There will also be a featured workshop discussing the new crazy expensive yet totally amazing Espresso Book Machine--the print on demand self publisher's dream come true. (We are still waiting to see this machine in all of its glory with our own eyes, though Third Place Books does now own one.)

So if you are unfamiliar with blogging or maybe just want to learn some new tricks from the trade, the Finding Your Readers in the 21st Century Writers' Conference presents a great place to begin. Registration began on April 13 and it's bound to fill up quickly so take the opportunity and let the blogging begin!

The general price for the weekend-long conference is $300, Hugo House members pay $270. Arranged Box lunches for Saturday participants range from $11.34-13.15.
Posted by Seattle Lit at 9:00 AM