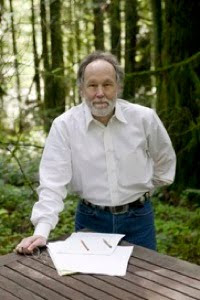 Barry Lopez will be speaking at Benaroya Hall as a part of Seattle Arts & Lectures on Wednesday, April 7, at 7:30 p.m. Tickets range from $10-70.

Revered as "a modern day Henry David Thoreau,""a writer's writer," and overall as "arguably the nation's premier nature writer," Barry Lopez is an essayist and author of over a dozen well-known fiction and nonfiction works.

Lopez is best known for his 2001 book, Arctic Dreams, which won him the National Book Award. Other nonfiction books of Lopez's include About This Life, Crossing Open Ground, and Of Wolves and Men, which was also a National Book Award finalist and recipient of the Christopher and John Burroughs awards.

As a landscape photographer until 1981, it's easy to understand why Lopez is, in many ways, in tune with the nature around him, and that of in the world at large. Lopez has traveled to over 70 different countries, has spent time with aboriginal peoples in the high Arctic of Canada and Alaska and Australia's Northern Territory, and he currently resides in western Oregon near the McKenzie River.

Throughout all of his nonfiction work, Lopez is a master of examining the relationship between human culture and community with physical landscape. When asked in an interview on what he thinks of himself as doing in the world, Lopez responds:


"I don't think so much about what I am doing as about my responsibilities, my social responsibilities as a writer. Whenever I go somewhere, whether it is Antarctica or the Galapagos, or East Africa, or Australia, I am acutely aware of the fact that my community, all the members of my community, cannot go to those places, so I am responsible in that set of circumstances for several things. Uppermost is paying attention to what is going on there, so I can come home and tell a story that in some way or other is useful to the community.

My life is defined largely around issues of language and story and landscape, and I would be hard pressed to separate those three issues. I think the way in which landscape is imperiled--by manipulation and attenuation to serve various political and economic policies--is almost indistinguishable from the way in which language and story are imperiled."

Though he is yet to have written a fictional novel, Lopez is the author of nine short-story collections, including Light Action in the Caribbean, Lessons from the Wolverine, and the Oregon Book Award winner, Resistance. Similar to the work of Thoreau, Lopez beautifully presents and weaves strong themes of personal and national identity, ethics, and intimacy into all of his stories. On writing fiction, Lopez states:


"The basis for fiction is emotional truth. It's got to be the case that the reader reading the work of fiction says: This is plausible, this could happen. I know this.

What happens in fiction is people most often say: I knew that, but I'd forgotten that. That is how we are or that is how our emotional landscape is. But you very rarely read anything in fiction that you don't already know; you're just reminded of what you forgot.... My concern is for the fate of the reader."

In addition to being the author of over a dozen fiction and nonfiction books, Lopez is a frequent contributor to publications such as The Georgia Review, Granta, National Geographic, and The Paris Review and his work has been included in anthologies such as Best American Essays and Best Spiritual Writing.

For his appearance at Seattle Arts & Lectures, Lopez will be speaking on his recent collection and the idea of  Home Ground: Language for an American Landscape, which Lopez co-edited with Debra Gwartney. Home Ground includes 45 well-known writers--such as Barbara Kingsolver, Bill McKibben, and Luis Alberto Urrea, among others--discussing words and ideas that refer to various aspects of American landscapes.
Posted by Seattle Lit at 3:06 PM