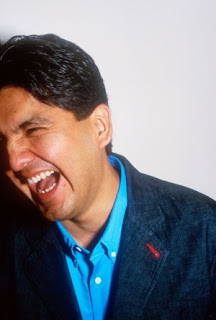 This week certainly started off with a bang for author Sherman Alexie, as it was announced on Tuesday that the author's fiction collection, War Dances, had just been selected as the winner of the 2010 PEN/Faulkner Award for Fiction--America's largest peer-juried prize for fiction.

Up against almost 350 other novels and short story collections by fellow American authors, Alexie will receive $15,000 along with the prestigious award and very well-earned bragging rights. The four other finalists--Barbara Kingsolver for The Lacuna; Lorrie Moore for A Gate at The Stairs; Lorraine M. López for Homicide Survivors Picnic and Other Stories; and Colson Whitehead for Sag Harbor--will each receive $5,000.

PEN/Faulkner judge Al Young says of Alexie's honored book, "War Dances taps every vein and nerve, every tissue, every issue that quickens the current blood-pulse: parenthood, divorce, broken links, sex, gender and racial conflict, substance abuse, medical neglect, 9/11, Official Narrative vs. What Really Happened, settler religion vs. native spirituality; marketing, shopping, and war, war, war. All the heartbreaking ways we don't live now--this is the caring, eye-opening beauty of this rollicking, bittersweet gem of a book."
War Dances is described as "a collection of structurally inventive pieces on the themes of love, betrayal, familial relationships, race, and class. The stories are interspersed with poems which refract their themes or topics."

Upon winning the prestigious American fiction prize, Alexie admitted that the award is particularly meaningful to him not only because he is the first Native American author to have won it, but also because "[The PEN/Faulkner Award] was established by writers, for writers. The fact that writers give the award is big for me, especially for this book." Alexie has referred to War Dances as a "mixtape" of writing styles and forms that not all readers and critics understood clearly. Alexie speaks about the book as a collection of "...stories, poems, themes intersecting themes. Some people missed that."

Alexie will be adding this recent high honor to a laundry list of past awards and recognition, including  the 2007 National Book Award for Young People's Literature for his novel, The Absolutely True Diary of a Part-Time Indian, and another recent win, the Native Writers' Circle of the Americas 2010 Lifetime Achievement Award.

And guess what--Alexie will be here in Seattle next month! To help celebrate the PEN/Faulkner high honor, Alexie will be reading at Elliott Bay Book Company on April 23 with fellow PEN World Voices authors Sofi Oksanen, author of Purge, from Finland; Tommy Wieringa, author of Joe Speedboat, from The Netherlands; and Christos Tsilolkas, author of The Slap, from Melbourne, Australia. Let's all give the guy a huge round of applause; because honestly, he had us at The Lone Ranger and Tonto Fistfight in Heaven and we couldn't be more happy for him.
Posted by Seattle Lit at 9:15 PM