PBR and Prose at The Hugo House 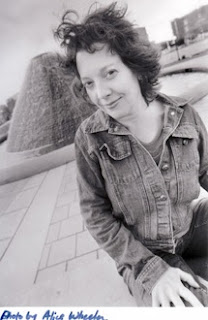 The Hugo House is hosting their third installment of the popular Cheap Wine and Poetry spin-off event, Cheap Beer and Prose, tonight at 7 p.m. Sponsored by Pabst Blue Ribbon, there will be plenty of cheap beer to go around for only a buck--and really, where else in town can you get a $1 PBR along with a night of great readings from some of Seattle's favorite authors?

Tonight's reading will feature stories, essays, or chapters from local authors Stacey Levine, Jonathan Evison, Bret Fetzer, and Janna Cawrse Esarey, with Charla Grenz hosting. And following the four author's readings, there will be an open mic for anyone that would like to share their own prose up on stage.
Stacey Levine is the author of the recent fiction collection The Girl With Brown Fur and other novels such as Frances Johnson. Levine is a Pushcart Prize nominee and has had fiction featured in Tin House, The Fairy Tale Review, and other venues.

Janna Cawrse Esarey made major waves last year with the publication of her Indie bestselling travel memoir, The Motion of the Ocean: 1 Small Boat, 2 Average Lovers, and a Woman’s Search for the Meaning of Wife. If you've been to Elliott Bay or Barnes & Noble in the past year, chances are you've seen Esarey's book in the recommendation section like we have. CNN.com's The Frisky referred to the true story as, "hilarious,
poignant and completely relatable." And who can argue with The Frisky? Bonus points for if you know what The Frisky actually is. (We don't, but it's fun to say.)

Jonathan Evison is the author of the book All About Lulu, which took home the 2009 Washington State Book Award. Evison is the 2009 recipient of the Christopher Isherwood Foundation fellowship and also has a forthcoming book, West of Here, that will be available this fall. As per his Hugo House bio, Evison loves rabbits and beer, and lives on Bainbridge Island.

Bret Fetzer, who you might know from his articles in The Stranger and Seattle Weekly, writes plays, screenplays, fiction, and basically anything other than poetry. Fetzer has had a play produced by Annex Theatre, has written a collection of original fairytales, and is currently working on a young adult novel about teenage superheroes.

With such a varied bunch of local authors and an open mic invitation, we have no doubt that tonight will be extremely cheap and extremely fun for all. Donations are being accepted to keep the beer flowing in the future and there will be plenty of books, t-shirts, and other merchandise for sale. It's recommended to show up early to get a seat, as Cheap Wine and Poetry normally only has standing room left. So get out there, put a couple cold ones back, and read your work or hear local authors read theirs. $1 PBR; enough said.