A Norway Serial Killer on the Loose in The Devil's Star 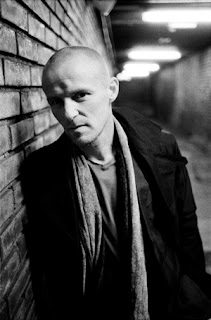 Jo Nesbo will be reading from his latest crime noir novel, The Devil's Star, on Monday, March 22, at 7:00 p.m. in Ballard's Lief Erikson Lodge. This event is FREE.

By complete chance, we happened to read The Devil's Star in the same weekend that we watched the Red Riding film trilogy. We didn't necessarily plan on having a weekend filled with European serial killers and police corruption, but damn--it was a good, chilling weekend.

Though Jo Nesbo's novel and the unrelated film series have much in common, The Devil's Star takes place in Oslo, Norway and features Nesbo's most popular returning character, Detective Harry Hole. Hole, in fact, has appeared in a string of Nesbo's past detective novels, making The Devil's Star commonly known as "the latest installment in the Harry Hole series."
Hole is known well by many of Nesbo's long-time readers, yet Nesbo wastes no time in giving him a full, proper character introduction. (If you're yet to have read Nesbo's work, The Devil's Star provides a great starting point.)

Harry Hole's character embraces everything of that in the classic anti-hero. Foremost, Hole's an alcoholic and is constantly setting himself up for failure. He's messed up his long-term relationship in exchange for Jack Daniels, doesn't show up to work for weeks on end, and he can't even remember which bars to go to that are yet to have 86'ed him. To a random person on the street, Hole would come across as a drunk slob; a regular joe with a drinking problem.

And it's this first impression that seems to work extraordinarily well in Hole's favor and keep him out of harm's way. Other characters, such as those that Hole is chasing, misjudge his hardboiled detective instincts, and play him for a fool. His police colleagues snicker behind his back; they've seen him in his glory days as a highly-regarded police detective and now as a sloppy drunk that's good for nothing. But as The Devil's Star shows, Hole is far from the end of his glory days--in fact, he's just getting started.

At the beginning of the novel we quickly learn that Hole has been too drunk to show up to work for a couple of weeks and that a young woman's murder will be his last case, as his drinking has finally extinguished his career. It's an extremely hot Oslo summer and the holiday season so many are out of town on vacation. Hole is assigned to the case with another detective, Tom Waaler, who we come to know as Hole's long-time adversary.

The crime scene is brutal; a young woman who has been murdered in her flat with no sign of forced entry. She has a severed finger on her left hand and what they later realize is a rare, five-pointed red diamond star, underneath her eye lid. With no immediate suspects in sight, Hole begins to fear that it might be the work of a serial killer; and a second brutal murder along with the discovery of another five-pointed red star only confirms Hole's suspicions as correct.

The Devil's Star is a well-rounded noir novel and frankly, we had a hard time putting it down even though we were on a serial-killer-weekend spree of sorts. Nesbo sets up the mystery well, and along with plenty of vignettes and backstory, the novel can be viewed as two stories weaving together--that of catching the serial killer and of Hole finally uncovering Waaler's potential corruption in the police force. Nesbo also does a fantastic job with developing the character details and those of Oslo; the story remains colorful, exciting, and completely unexpected right up until the very last moment. If you're a noir lover and don't yet know Harry Hole, now may just be the best time to get acquainted.
Posted by Seattle Lit at 9:05 PM