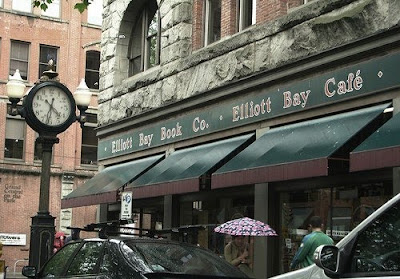 Tomorrow is Elliott Bay Book Company's last day in its well-known Pioneer Square location. The First and Main Globe building had been the historic book store's home since June 29, 1973. Even though Elliott Bay Books will remain in town at its new Capitol Hill location (1521 10th Ave.), opening in mid-April, we can't help but feel as if a good friend is moving away.

We're positive that the new store will be just as much of a home for us in the future as the Pioneer Square location is now, but that doesn't mean we have to be happy about it. Change is hard; and though we will miss the Shakespearian Globe-esque feel of the space, the smell of cedar and the wall-to-wall books, the creaking floor boards, and not to mention some of our most favorite Seattle literary moments, we're supportive and optimistic for Elliott Bay's future on the hill.

On the new location (as shown below), Elliott Bay Book Company says,

"Be assured--the new place will have its own distinct charms, many of them very similar to what people have known and enjoyed about our Pioneer Square home. Everyone that we know of who's had a sneak peek as construction has ensued has gone 'wow' in appreciation and anticipation." 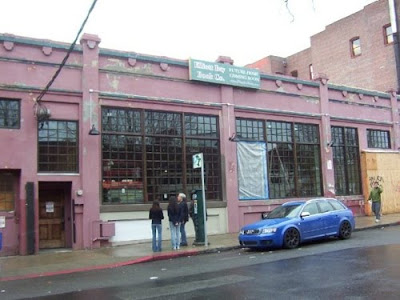 And granted there are positives in this move--the store will now be in walking distance for many living on the hill; the space is larger than the Pioneer Square location and will include a café and a special room dedicated to author appearances; there will be parking available underneath the store; the store will finally have wheelchair access; and it will be close to many other Seattle favorites such as Cal Anderson Park, Odd Fellows, The Comet, Neumos, and more.

Tonight's very last reading ever in the Pioneer Square location will feature Dutch filmmaker and author, Paul Verhoeven, discussing his latest book, Jesus of Nazareth (not to be confused with Pope Benedict XVI's book), with SPU Professor Doug Thorpe.

Verhoeven is known for directing famous (and infamous) films such as Star Troopers, Showgirls, Robocop, and Total Recall, among others. And another interesting aside--Verhoeven was the first nominee ever to actually show up to the Razzie Awards and personally accept his "awards" for Worst Director and Worst Picture for Showgirls. (At least we know the guy has a pretty good sense of humor.) Other films of Verhoeven's have received 9 past Academy Award nominations.

Jesus of Nazareth, translated by Susan Massotty, depicts Verhoeven's "lifelong fascination with the facts and fictions surrounding the life of Jesus of Nazareth... Combining his passion for the subject with an in-depth knowledge of the history gained through rigorous study, Verhoeven paints a portrait of Jesus the man and Jesus the radical prophet. Verhoeven constructs a new vision of Jesus as a child born from the rape of Mary by a Roman soldier, as a spiritualist who performed exorcisms by screaming and spitting in the mouths of the possessed to drive out demons, and as a militant revolutionary who urged his followers to arm themselves."

Jesus of Nazareth may strike you as an interesting choice for the very last reading at Elliott Bay. That's because it is. But really, no one reading could be fit for everything that the Pioneer Square store has given to our community in over three decades--it would just never be enough. Tonight presents a great chance to say your last goodbyes to the Pioneer Square location, show your support, and wish Elliott Bay luck with their move to Capitol Hill, where we'll see them again on April 15 at their grand opening block party celebration. And until then, as always, all Elliott Bay Books are available via the store's website.
Posted by Seattle Lit at 1:07 PM