The Amazing Adventures of Michael Chabon 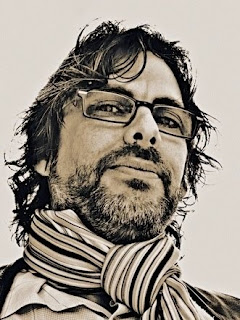 We've been waiting to see Michael Chabon since last September when we first received the SAL letter in the mail announcing this year's guests. Had you asked us last fall if we knew when Chabon would be speaking we probably would have come across like one of those "overloaded" Bing characters, giving you a verbal mishmash of miscellaneous Chabon information along with the fact that he would be here in March.

Chabon has always been on our short list of favorite authors and as his career continues, we can't help but grow more fond of him--not only as a writer, but also as a person. His repeatedly proven versatility in genre fiction including that of pulp, fantasy, science fiction, and so much more has truly earned him a rightful place in modern literature history. John Podhoretz, of the The Weekly Standard even takes it one step further, refering to Chabon as "The best writer of English prose in this country, and the most interesting novelist of his generation."
We first read Chabon a couple of years ago after close friends prodded and promised us that we wouldn't be disappointed. We were given The Amazing Adventures of Kavalier and Clay as a gift. We were skeptical. We don't normally have interest in or pay much attention to super hero comics, but kept thinking to ourselves, well, it did win the Pulitzer... and he DID also write Wonder Boys... luckily our friends know our taste better than we do.

Everything about Kavalier and Clay, for us, was magic. The plot-driven fiction, the fantastical escapes (metaphorically and physically), the Jungle-esque work and power struggles of the time period, and not to mention the romantic notion of super heroes taking on Hitler and saving the world--who wouldn't want to read that book? It reminded of us of reading Mark Twain for the first time--getting caught up in the excitement of the adventure, the powerful underlying social commentary, and the characters that forever cement themselves in your brain as if they actually exist. 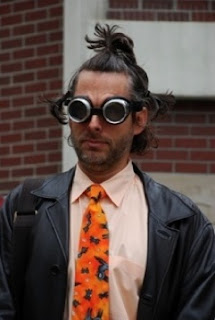 Chabon first realized he wanted to be a writer at the young age of ten when he was given a school assignment to write a short story involving Sherlock Holmes. In many interviews, Chabon has looked back on this moment by saying, "I thought to myself, 'That's it. That's what I want to do. I can do this.' And I never had any second thoughts or doubts."

Chabon's first novel, The Mysteries of Pittsburgh (recently adapted into film), was actually written as his Master's thesis. His professor was so impressed with the novel that he secretly sent the manuscript to a literary agent and Chabon was given a $155,000 advance on the book--an incredibly high amount for a first-time novelist. Mysteries of Pittsburgh debuted in 1988, quickly becoming a bestseller and throwing Chabon into literary fame at the age of 25.

Overall, Chabon has shown us since his beginning in 1988 that he is no one-trick pony. He doesn't JUST want to be his generation's Raymond Chandler or Philip K. Roth, or McSweeney's poster child. Chabon does what he wants; he writes about what interests him in the moment, whether it's fiction or nonfiction, pulp or fantasy; at times, even taking different genres and fixing them together to fit a novel's purpose.

Though Chabon's writing continues to vary and reshape in different forms of literature, there are always definite, recurring themes present--even in his latest autobiographical collection, Manhood for Amateurs: The Pleasures And Regrets Of A Husband, Father, And Son, a.k.a Chabon's "Daddy Diary." Themes such as abandoment, belonging, that of Jewish  and gay/bisexual identity, fatherhood, divorce, exile, and regret; all appearing in large and small manners throughout each of his novels. However, this is certainly not to say that Chabon's work is filled with bleak sadness--rather, Chabon is quite humorous--mixing Yiddish wit and amusement into his work, creating a unique and in-depth balance.

For his Seattle Arts & Lectures appearance, Chabon's will be speaking on, "I was Edgar Allan Poe! A true story of imaginary reincarnation, literary influence, and pathetically belated revenge." We're not quite sure what this exactly means, as it could mean a lot of things, but we're excited. We have no doubt that like his work, Chabon has some tricks up his sleeve in store for us, filled with plenty of the unexpected surprises and twists that he has been giving his readers now for two decades. And, as an added bonus, if you are a patron ticket holder ($50) you're also invited to join Chabon at the W Seattle Hotel for an after-party with complimentary wine and hors d'ouevres.
Posted by Seattle Lit at 10:24 PM